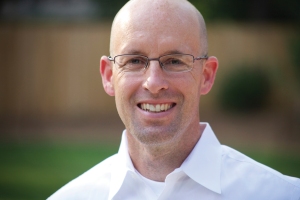 Darron Collins is President of College of the Atlantic.  He’s also a graduate from the class of 1992.

Darron will be the first to say that taking this job is one of the most exciting things he have done in his life – and that’s saying a lot.

He has lived and worked in rural Guatemala, in Asia’s Amur-Heilong region, doing conservation work along an area that follows the Amur River which wanders through Russia, Mongolia, and China, and also in Brazil’s Xingu River Basin. As a recipient of a Watson Fellowship, Darron traveled around South America for a year, looking at the environmental impact of hydroelectric dams. Then he headed south to Tulane University in New Orleans, where he received first a MA in Latin American Studies and then a PhD in anthropology. He has worked for the World Wildlife Fund and the Amazon Conservation Team and has taught in several colleges – including at COA, where his senior project was creating and co-teaching with Ken Cline the very popular class Whitewater / White Paper.

And now Darron is back home, at COA.