Japan has a complicated relationship with the atomic world that spawned precisely at 8:15 am on August 6, 1945. At that moment an atomic bomb named Little Boy detonated 1900 feet above the city center and incinerated 80,000 lives. I suppose there’s no good name for a bomb, but that one seems about as bad as it can get.

Over the next three months another 70,000 died from exposure to the radiation. Countless others perished in a most gruesome way as the months and years passed. The event is venerated in the Hiroshima Peace Memorial Museum.

View from the Hiroshima Peace Memorial Museum – Little Boy exploded across the field and 1900 feet in the air.

Following the tranquility of the zen center, the excitement of the signing ceremony, and the ferry and car ride to the city of Hiroshima, I had a 45 minute window to see the museum before having to head out and meet the governor. Those unfortunately hurried 45 minutes flipped some switch inside – something I’ll expound on in the conclusion to this series.

I won’t go into too much detail about my experience at the museum. I will say that when I came to exhibit #21, which features the clothes of a 14-year-old girl who perished in the event, the personal nature of the connection between that poor girl and my own 14-year-old daughter Maggie was unbearable. It was hard to hold back the tears from that point on and I’m sure the governor wondered about my swollen, reddish eyes. Or, on second thought, perhaps he’s quite used to it.

The governor was a thoughtful, generous, smart, and highly refined guy who had studied at Stanford Business School not long after COA board chairman Will Thorndike. More serendipity. Governor Yuzaki is championing educational reform and wants to make Hiroshima the HQ for the country’s move in that direction. I proposed that Nagao-sensei, the Governor, and I co-author a short piece about how the Fukushima disaster inspired educational reform and outlining some of the early elements of that reform. Though we only had thirty minutes with him, the governor was wildly enthusiastic about supporting the unfolding relationship between COA, Ashoka Japan, and the municipality of Osakikamijima. 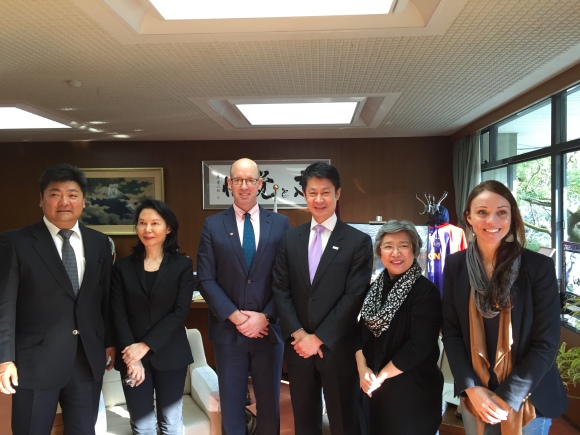 We then drove back to the ferry, crossed back onto the inland, drove around in the dark, and somehow found our way to an amazing restaurant. I could never find it again if I had to. It was a one-table restaurant, run out of what felt like the living room of the chef’s house. I was spent from the long day. The sake didn’t help. I ate more raw fish than I ever thought possible and ended the meal with shabu-shabu: thin slices of raw meat you submerge in boiling water and then douse with a ginger- and vinegar-spiced soy sauce. I slept very well.

Celebration Meal, 1: sashimi – the snapper, the piece with scales, was my favorite

My last thought as I finally closed my eyes: College of the Atlantic’s co-founder Father Jim Gower originally intended for the college to be called the Acadian Peace College.