My third day in Japan was an 18-hour affair. I’ll split it in two sections for this blog. 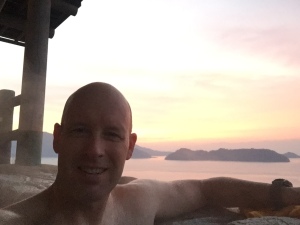 Onsen – an inspiring if impractical place to write.

I woke up with another onsen and was inspired to bring my notebook and try and capture the conversations we had yesterday. We needed more form to our ideas. The exercise was very productive, though the water in liquid and gas forms at the onsen made writing a bit of a challenge. This is what that session produced:

A College of the Atlantic-Ashoka U Changemakers Lab in Osakikamijima, Hiroshima

Some of the specific ideas we discussed included:

I read this summary to my colleagues on the way to the zen center. They were happy and felt it reflected a consensus in a way we hadn’t been able to articulate before.

We prayed and practiced zazen in the early morning. The immaculate temple was built in 1545, but neither the antiquity nor the beauty helped my knees and stubby legs find their way to the full lotus position. I sat cross-legged and my mind wandered, but it was a great experience and the monk was a generous, thoughtful, inspiring guy.

The Buddhist temple on Osakikamijima

We then went to the town office where we were scheduled to sign a Memorandum of Understanding. Such a signing always makes me nervous. I never want to promise more than I can deliver and felt a little odd signing something where there’s been so little discussion with my COA colleagues. But signing something was important to the mayor who generously paid for my entire trip. After some careful wordsmithing and negotiations, we settled on the following language:

We signed away. It felt like we were signing a peace treaty, bombarded by camera flashes from the crowd. I think the MOU was appropriately vague and useful — there was certainly the sense in the air that the municipality was excited to support any efforts that might emerge.

The OK mayor and I with our signed MOU

My colleagues felt they could garner financial support for the ten-day pilot as laid out in the summary above. To me it seemed like a low-risk experience that could raise the profile of COA, offer an exciting opportunity for COA students, and be a good “first step” toward doing something larger if there was continued interest among our faculty, staff, students, and board. The benefits to the island and to the educational system of Japan as a whole would be further off, but this pilot program could very well set the stage for those larger goals. That the College of the Atlantic began with a similar pilot program focused on the future of Bar Island in Frenchman Bay, Maine was not lost on me.

We bowed and headed for the ferry and Hiroshima City.