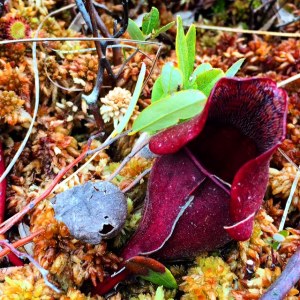 I write to you from the shores of Witch Hole Pond, 4942 paces from the podium under the tent on the North Lawn and two weeks before graduation. I’ve waited for the winds to shift for a week – they’ve been blowing from the southwest, which makes the fly-fishing cumbersome. But tonight the wind’s in the north and just strong enough to keep the black flies at bay, yet not interfere with my casting.

And that’s about as far as I got with writing out at the pond.

I wanted to do the Thoreau thing so badly, and though there was plenty of inspiration with the brook trout, the eagles, the pitcher plants, etc., it didn’t exactly translate into any great ideas for this welcome address other than:

Welcome to the 42nd College of the Atlantic Commencement.

I don’t expect you would remember this, but when I did my commencement welcome two years ago I searched for a word that characterized the senior class and the COA family as a whole. I landed on scrappy. Not in the sense of disheveled, but, as in, having the gumption to throw oneself into the mix, sometimes at great peril, in order to get things done.

At last year’s commencement, I felt scrappy overemphasized action at the expensive of thought, so I morphed the description to contemplative scrappiness.

I like that phrase. But more than liking the phrase, I really like the idea of building off of the year priors’ graduation address. So today I’m going to continue to build on the phrase and maybe in a decade or two I’ll have it nailed.

I want to be extra careful with whatever term I add this year because many of the students seated here in front began their career at COA at the same time as I began my COA experience as president four years ago. I remember vividly, for example, the first day of fall term 2011, meeting Anyuri as I sheepishly worked my way up to my office, on-the-fly working out what it means to be a new president and what it means to repatriate yourself into an institution you’re getting to know for the second time. I was trying to play to cool: I’m sure I was painfully awkward

Humility is not generally the word on the tip of most college president’s tongues. We, as part of the very competitive world of higher education, tend to emphasize bold confidence. Especially when we speak to families on a day like today, the rhetoric drifts toward: “we are the best; you, students, are prepared and equipped with complete knowledge; our students solve big problems like hammering a nail; our way of teaching is the best and is unique in the world of higher education; think big, do bold, get there first; change this, save that, no fear, etc.

In this same vein, colleges promote themselves as a training ground for today’s “creative economy” and as the launching pad toward success in a “world with endless possibilities,” where choice is king and you’re meant to have the skills to pivot on any dime the world throws at you and be imbued with a confidence that will carry you over any hurdle. Again, it’s typically about bold and brash confidence.

But, here I am, saying I’m most proud of our humility; hoping that we, as a college, can continue to emphasize such humility. And that may strike you as odd.

Graduates, for your years here at the College of the Atlantic, one of the most important things I hope we’ve instilled in you as human ecologists is that the world is a complex place, that there are few easy answers out there. And, most often, just when you think you’ve got a hold of the complexity, you lose it; or, better still, you poke and prod at the question endlessly, skeptical of whether it’s even possible to achieve clarity. We’ve asked that you supplicate yourself to the complex world and, to do that effectively, you have to be humble.

I hope we’ve provided enough uncomfortable situations for you – because there’s nothing like discomfort and social and intellectual awkwardness as a way to ramp up one’s humility.

Namisha Bastedo, for example, in working with elders from a First Nations community in Northern Canada jumped into a sea of awkwardness with both feet when she worked to learn the Dene language. In learning a language, one is in a way reborn, becomes a child in an adult body, and must wade and waffle through awkward misunderstanding and opaque communications. In learning language, one supplicates oneself to complexity and becomes humble.

Casey Acklin, as another example, could very well have stayed in what to him were the intellectually cozy confines of a genetics laboratory in order to understand and explain dementia. But, as a good human ecologist, he stepped out of those confines into the world of ethnography and discarded reductionism. He ventured beyond the lab and worked with dementia caregivers all over Europe. Participation in a different world through ethnography involves a similar kind of regression to childhood; and, so, in crossing disciplines too, one supplicates oneself to complexity and becomes humble.

And there’s James Crawford, the human ecological ironworker, the builder, the craftsman. In the process of material construction, there’s no hiding behind thought. In material design, you wrestle and dance with molecules and the end product either works or it doesn’t. With plenty of trial required in creation, there comes plenty of error. In using tools and learning to manipulate the form of things, one frequently comes face to face with failure and, once again, supplicates oneself to complexity and becomes humble.

And, as a final example, there is the attentive, patient observation of the naturalist, someone like Anne Hurley. In contemplative, precise, and patient observation – whether you’re looking at the behavior of marine mammals on a rocky ledge or the human debate over how to protect them or the way the light casts shadows in an attempt to draw them, Anne experiences a deep sense of humility in observation. Most of the time in such observation there’s simply not a lot “big” happening. Whales aren’t continuously breeching; brook trout are not continuously rising to the surface. In such an absence of bigness, one begins to see differently, one begins to see and understand the smallness and pays attention to the details that otherwise may have been lost. With practice, everything can become big and interesting and, so, in such patient, attentive observation, there’s an appreciation for the small and a kind of supplication to complexity that inspires humility.

But, with all the humility, all the questioning, all the supplication, one might conclude that human ecologists prefer to sit back in a gentle, Zen-like state of stasis as we struggle with complexity.  At some point, the child that is the new language learner, the participant in new social contexts, the maker, the patient observer comes to believe something and is inspired to act on that belief.

The problem with activism is that it presupposes you know something and know it with great confidence. John Deans, a COA alumnus, is currently risking his life from the cockpit of a sea kayak protesting oil drilling in the arctic. He’s pretty darn convinced that drilling in the arctic is a really bad idea. He has come to a belief and acts on it, not for his own good, but for the benefit of others.

And though John’s is something of an extreme case, at some point Namisha, Casey, James, Annie, and everyone else sitting down here will come to believe and will act and will therefore become an activist, not always in the political sense, but as an agent of making change.

The key ingredient, though, is what I might call “the toggle” – can we balance the boldness and confidence of action with ultimate humility. This is what we teach and this, I believe, is what the world desperately needs. I’m confident that these seventy-one human ecologists have that ability to toggle, between scrappy and contemplative, between humility and bold action.

My confidence in these graduates stems from the fertile ground of support represented in this very tent. And, because the shortest path to humility is gratitude, I want to close by thanking everyone that’s helped you along your journey here. Thanks to Ed Kaelber, our grand marshal and founding president of the College of the Atlantic; thanks to the inspiration and inspirational lives of Polly Guth, Robert Kates, and Naomi Klein; thanks to the faculty, staff, and students who make up the community here at 105 Eden Street; thanks to our trustees, friends and colleagues, and, most especially, thanks to the parents, families, and loved ones of today’s graduates who have trusted COA with the care and cultivation of your contemplatively scrappy humble activists. Thank you.

One thought on “Commencement 2015: My Welcome”