Will Thorndike and I

I remember swimming in the bay twenty+ years ago in one of the earliest Bar Island Swims. It wasn’t the first, but it may very well have been the second. I know Ken Cline was there. I can’t remember, embarrassingly, whether we swam to or from Bar Island, but I don’t remember any long, barefoot walk home, so I’m guessing it was from. It was cold. It was fantastic and, ironically given my earlier sentence, memorable.

When I got the job as president, there was never a doubt in my mind that I would do the swim year after year. Fall of 2011, my “Year One,” seemed a lot colder than 1989 or 1990. I remember a bit of pain in hitting the water. I remember struggling to change clothes in the Gates bathroom and the lights starting to pulse and go blue a bit as my body dealt with cold blood returning to my core. I remember falling asleep at 9 pm that night as soon as my head hit the pillow.

For the “Year Two” swim, the plan was to have Will Thorndike as my swim buddy.  Yes, that’s the Thorndike of our Thorndike Library. Will’s Aunt Betty was one of the most important, most influential trustees the college ever had and now Will would be taking on the role as Chairman of our Board of Trustees. Will wanted to be the first board chair to do the Bar Island Swim — and I wholeheartedly encouraged him to make that happen. How cool are we??!!: A college where the Board Chairman is not only willing but excited to swim a third of a mile in frigid waters to help sanctify the opening of the school year.

During my convocation speech I referenced Will’s new role as board chair and scoured the seats to make eye contact. There he is, up in the balcony at the top of the staircase. Ball cap and shorts. He was as eager as I had been my first year. What a great guy.

So, although the weather report didn’t read favorably, by mid afternoon a general calm and even sunshine fell across Frenchman Bay. Things looked good. I changed into my get-up and my heart started to race a bit, imagining that first shock the cold water would bring. Yes, our waters, at 60 degrees, were unseasonably warm, but that kind of warm is still a shocking kind of warm.
Then the wind picked up—from the worst direction possible, the north, and Ken Cline came into my office to let me know we’d have to postpone the swim. I had to face Will and tell him, “no swim.” The poor guy drove up from Boston to do this—next week just wasn’t an option.

Walking out in front of Turrets, Will turned to me and with the grin of a 14-year old with a recently acquired dangerous and unsanctioned idea said, “Wanna do it anyway?”

Off to the pier.  Off to hijack a zodiac and a few accomplices for this clandestine running of the Bar Island Swim.

I will openly admit that, from the comfy shelter of my office, I thought the decision to postpone the swim was meek. What had happened to the bold, risk-taking Ken Cline I once knew and once saved from a frothy hydrological pit in the Kenduskeag River? He had gone soft.

But things looked a lot different from the bouncy zodiac seat. And they looked more different still after the initial shock of the plunge wore off, when even a six-inch swell was swell enough to force cold salt water into my lungs and stomach. By the time Will and I hit the water, the chop was at least two feet and the current wasn’t friendly either.

I will also openly admit that, from the uncomfortable trouncing those waves were doling out, my mind started to wander toward aborting this mission. But there, across the frothing sea, swam Will. He had quite a bit less body fat than me and seemed just fine (or at least ok)—I couldn’t let my ever so slightly older elder statesman down.

That’s just the kind of macho bullshit that will get you killed.

Whispered John Anderson from his lair in Witchcliff.

The sea doesn’t give a damn if you drown!

He’s right of course, but I’m swimming on.

Oh my God, what is that in the water? It’s a hairy, smiling Loch Ness monster that looks vaguely like second-year student Erickson Smith, my accomplice on the Trans-Island Hike, when we summited 28 peaks in 24 hours. Where did he come from?  Where is he going? Dean of Student Life Sarah Luke is going to be pissed.

We raft up as best we can and forge on into the now crushing waves. I’m starting to see blue spots, reminiscent of the spots I saw in the Gates bathroom last year. Not a good sign, but the pier is just 50 yards off.  I can see a small crowd has gathered on the pier. 25 yards. They’re cheering. This is great. 15 yards. Will is going to be so psyched. 10 yards. I don’t think John Anderson is on the pier, that’s good. 5 yards. Wait, but why isn’t that woman smiling? Climbing the rope ladder. Uh, oh—that’s Sarah Luke and she IS INDEED pissed! 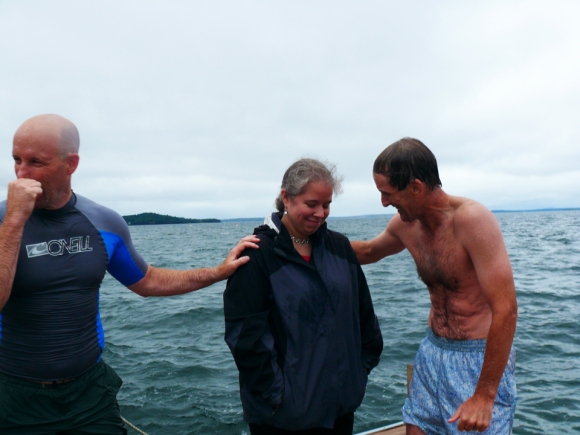 Sluke and I hugged it out. Her aggravation was warranted of course, the last thing we needed was a bunch of people yipping and yelling, “Well, they’re doing it, let’s hit the water!” Luckily, that didn’t happen (except for Erickson, but he’s of special stock and likely would have been out there anyway). And Will, blue, smiled. He smiled one of those deep, penetrating smiles that even turned Sarah’s frown upside-down.

Of course the official Bar Island Swim the following Wednesday was as beautiful a day as anyone could ask for. Will would have loved it. He wanted to nail the swim, yes, but he was every bit as excited about the students, the ritual and the fanfare and he would have loved the hum of the crowd on that day. But he was there in spirit.  And he was the first COA Board Chairman to swim the B.I.S. And his, cold, blue, shivering and smiling self will always remind me of the sense of adventure that defines this college.

And SLuke’s frowning concern reminds us all that this is a community, I am not alone—and that adventures generally go better when leavened by a dollop of wisdom.