Brother and sister Bill Newlin and Lucy Bell Sellers have been involved with our College from the very beginning.  Lucy Bell taught theater for two and a half decades (I never took the course…mistake) and Bill is a Life Trustee. 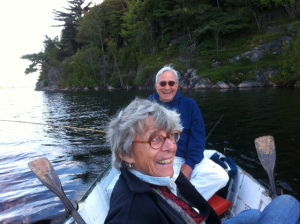 They are two of the smartest, warmest people on the planet.  They are also anglers in the purest sense of the term.  By “pure” I suppose I mean they love the process of fishing more than the act of catching.  As Lucy Bell says, “If you love to catch fish, you’re going to be miserable 99% of the time your on the water.  If you love fishing, you’re content during the entire experience.”

Bill feels the same way.  He’s also published a guide to the ponds and lakes of MDI and is looking for some adventurous COA student to work on a new edition of that text.  I’m hoping the new version might even include some attention to the freshwater streams of the island.

Around this time of year the alewives are starting to gather near the surface and to acquire their annual hankering for the taste of salt water.  The alewives of Long Pond make their way north, though the Ripples Road culvert, into Somes Pond and, if they’re lucky, into the salinity of Somes Sound.  This means that our friends the land locked salmon tend to hunt closer to the surface — a favorable condition if you like to fly fish.

So, with Lucy Bell at the oars, Bill in the stern and yours truly in the bow, we three launched from the Sellers’ Sand Point camp into Long Pond in search of salmon, or at least in search of good company on the water.

People unfamiliar with the sport of fly fishing always imagine the “cast.” You’ve all seen A River Runs Through It?  That whipping, back-and-forth action isn’t really the cast, but rather the “false cast” intended to get heavy weighted line and a very light “fly” pattern out where you want it.  It is a beautiful thing.  Mesmerizing, actually.  But the fish aren’t mesmerized in the least.  For them, the fly becomes relevant only when it falls to or through the water’s surface and takes on the look and feel of prey.  In other words … keep the fly in the water, damn it!

Lucy Bell has developed the highly successful method of rowing around the pond and trolling through as much water as possible with her rod clutched between her big and second toe.  She tells the story:

I took a friend out once.  He casted furiously to the north, south, east and west.  I trolled along with rod in foot.  He kept casting, the sweat starting to run on his brow.  I caught a fish.  He then focused on the shoreline … casting, casting, casting.  I caught a second fish. He casted to the open water — long, graceful arcs of line.  Nothing.  I caught a third fish.  He stuck his rod between toes and waited and waited.  I landed another.  He switched feet to his left foot — the foot I happened to be using.  Another fish struck my fly.  Some days are like that.

Bill and I took on something of an intermediate tactic, casting and then trolling.  But we didn’t see nor feel a thing.  No strikes.  No ailwives sloshing on the surface.  Lucy Bell was getting a great workout while Bill and I kicked back and talked about the college: we are so lucky to have people like Bill and Lucy Bell who love the college with everything they’ve got. 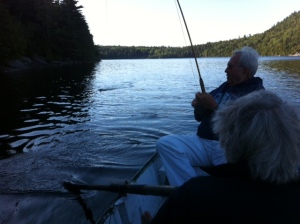 At the pump house on Long Pond’s southern shore, we turned back north and skimmed the lake’s eastern shore.  We’d pretty much given up on the idea of catching salmon and instead focused on small-mouth bass.  Casting at the shore somehow provides comfort — at least for me, I get that sense that “there’s just got to be fish near them rocks.”  Sure enough, there were.

Within five minutes of casting toward shore and then trolling over some talking, Bill nabbed his first smallmouth bass.  It was a whopper of a fish, all half a foot of him.  But I wouldn’t tell that fish he was small.  He was, like most smallmouth, pretty feisty.

My friend and angling/life mentor Perk Perkins, who happens to run Orvis Company, always tells me:

A fisherman starts out wanting to catch the biggest fish. Then, the most fish in a day.  Then, perhaps the smartest fish.  But eventually, that fisherman comes to want the ‘everlasting fish,’ caring more about the value of the experience and the health of aqueous ecosystems.

I’ll admit that I’m not quite there yet.  Maybe I’m at the “smartest fish stage”?  Thankfully, not more than five minutes after Bill, I landed my own overly aggressive and intensively flustered six-inch smallmouth.  We avoided the ‘skunk.’

Best of all, just a few yards from the Sellers dock — in the midst of good conversation and trolling — FLAM!!! — a 10 inch salmon devoured my fly.

Maybe I had finally found my Zen mind for that day.  Either way, that catch was the end of a great morning and the start of an awesome day.  THANK YOU BILL AND LUCY BELL!!!!!!